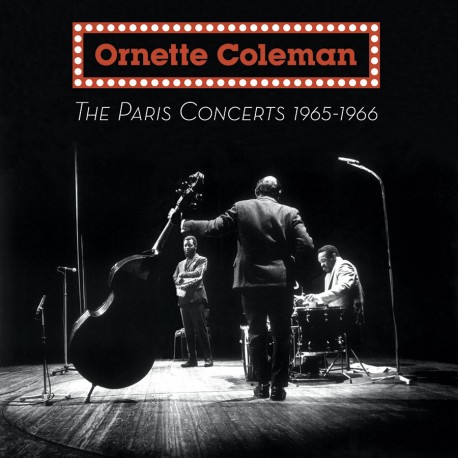 One of the last remaining living legends of jazz, Ornette Coleman is still touring the world with his music. He remains as innovative and creative now as he was in the late fifties, when his unique sound first came on the scene. In 1962, Coleman made his first recordings with his new trio, which featured David Izenzon on bass and Charles Moffett on drums. The long unavailable November 4, 1965 Paris concert at the Salle de la Mutualité opens this CD. According to discographies, the music recorded at that show belongs to the night’s second set.
The trip to Sweden took place right after the Paris stay, where the group performed and recorded at the famous Golden Circle in December of that same year.
On February 12, 1966, the group was back in Paris, where a portion of their concert was broadcasted and recorded. This music, appearing here on CD for the first time ever, was originally issued with incorrect titles, thus explaining the brackets we were forced to use in order to avoid confusion. This concert marks the last recordings that Coleman, Moffett and Izenzon made together in a trio format.
Their only posterior collaborations were made in 1967 and include a March 17, concert at the Village Vanguard in New York with Charlie Haden added as a second bassist (this performance remains unissued) and a single tune - "Holiday for a Graveyard", which also featured Haden - taped at Saint Peter’s Lutheran Church in New York during John Coltrane’s funeral.