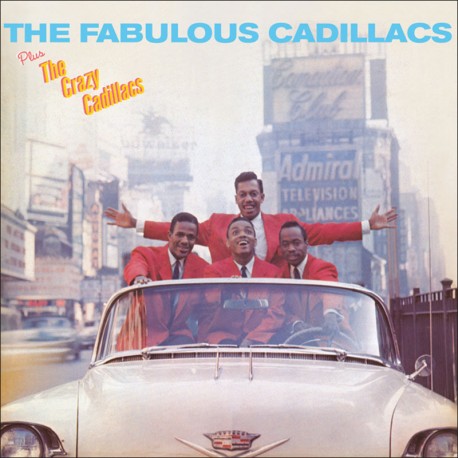 The Fabulous Cadillacs + the Crazy Cadillacs

Notify me when available
2 ORIGINAL LPs ON 1 CD

From Harlem, New York, The Cadillacs deserve a spot near the end of the top-ten list for best R&B vocal groups of all time. They began their recording career in 1954 singing high-spirited rhythm & blues with sunny harmonies, hard-rocking numbers and joyful doo-wop ballads that find so much favor among certain collectors today. The production throughout has that flashpoint of R&B, a hint of jazz, and a trace of pop that defined a lot of early New York vocal-group rock & roll. This release features the first two Cadillacs LPs, which were released on the Jubilee label: The Fabulous Cadillacs (1957), and The Crazy Cadillacs (1959). Both albums consist of selections from Josie Records’ singles dating back as far as 1954, including a number of R&B staples like “Zoom”, “I Wonder Why”, “No Chance”, and their biggest hit, “Speedoo”. This is a sure-bet purchase that maintains the original LP track sequence highlighting lesser heard cuts, which are just as enjoyable as the hits. These sensational recordings have been packaged together in this very special collector’s edition, which also includes 6 bonus tracks from the same period.
16-PAGE BOOKLET - RARE PHOTOS - VINTAGE MEMORABILIA - DETAILED LINER NOTES