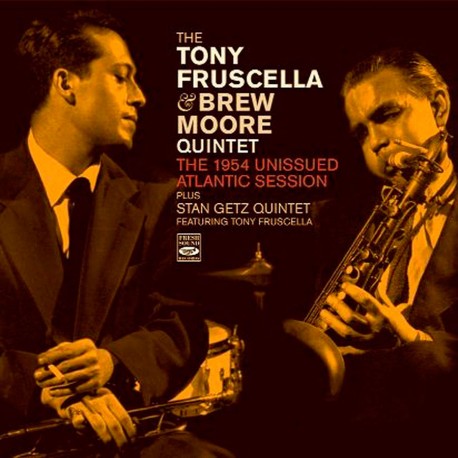 Notify me when available
NEVER BEFORE RELEASED IN ANY FORMAT

These recordings are among the rarest treasures in jazz, unseen and unheard since Atlantic produced them in 1954, and their release can be considered an event for all the jazz community. This was a relaxed and easy session, essentially valuable for the musicians involved, trumpeter Tony Fruscella (1927-1969), and tenor Brew Moore (1924-1973), most particularly for the former, who died at 42.

Fruscella who never enjoyed the recognition he deserved, was a poet of the trumpet with a veiled, haunting sound and a touching, very personal conception. The other unsung hero of this date is Brew Moore, a warm, emotional swinger whose musical god was Lester Young. A relaxed and swinging, but subtle and sophisticated player, for this date he assembled the kind of quintet he was most at home with, to play the sort of things they played in clubs, mostly variations on major and minor blues, and a delightfully original swinger by pianist Bill Triglia. Kindred spirits all, they speak with a shared pleasure and freshness undimmed by the years since then.

An addition to this legendary session are two sides recorded in 1955 while the trumpeter was member of Stan Getz's quintet, which project all the lyrical fire for which the group was celebrated.

Produced for release by Jordi Pujol.

"Fruscella was an enigmatic trumpeter with a deeply personal style, Moore a tenor saxophonist who once said that anyone who didn't play like Lester Young was wrong. At a time when Dizzy Gillespie's fiery playing was the general model, Fruscella was one of a few young trumpeters who concentrated on tone, lyricism and quiet melodic invention. Others were Don Joseph, Phil Sunkel, Miles Davis and Chet Baker. The Atlantic recordings that Fruscella and Moore made together in March of 1954 have never been released until now. Fruscella died in 1969, Moore in 1973.

The pieces are all blues except for one composition by pianist Bill Triglia. The CD contains nothing as captivating as Fruscella's solo on I'll Be Seeing You from the self-titled album he recorded for Atlantic the next year. Nonetheless, the trumpeter's flowing lines and deep sound combine with Moore's relaxation and swing in performances whose inventiveness surmounts the simplicity of the material. The rhythm section (Triglia, piano; Teddy Kotick, bass; Bill Henie, drums) is excellent in support. The underrated Triglia solos briefly and well. Fresh Sound rounds out the album with Blue Bells and Roundup Time, pieces that Fruscella recorded with Stan Getz in 1955 when he was in Getz's quintet.

This is a valuable find. The album, all but a rumor for decades, was widely anticipated."