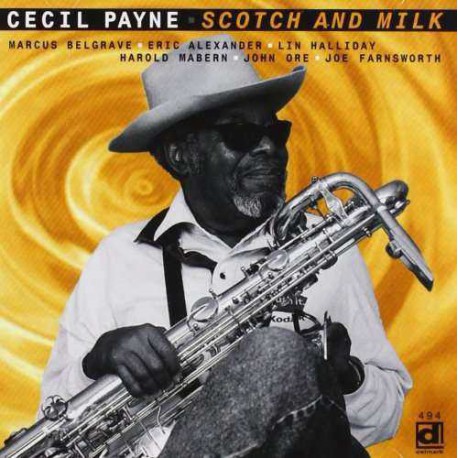 When Cecil Payne turned 70 in 1992, the baritone saxophonist was showing no signs of slowing down. Payne was 73 when he recorded Scotch and Milk, a fine hard bop date employing trumpeter Marcus Belgrave, tenor saxmen Lin Halliday and Eric Alexander, pianist Harold Mabern, bassist John Ore, and drummer Joe Farnsworth. Payne's chops are in top shape on this 1996 date, and the veteran saxman plays with a lot of passion on such exuberant originals as "Wilhemenia" (a Sonny Rollins-type jazz/calypso number), "Que Pasaning," and "Cit Sac" (which finds Payne switching to the flute). The only tune on the CD that Payne didn't write is the standard "If I Should Lose You," which serves as a nice example of his soulful ballad playing. Nothing groundbreaking takes places on Scotch and Milk; most of the material could have been recorded for Blue Note in the 1950s or 1960s instead of 1996. Scotch and Milk is a perfect example of a veteran improviser excelling by sticking with what he does best. ~ Alex Henderson

“ Next time you're feeling adventurous beverage-wise, try asking for scotch and milk. It may grow into an acquired habit. Unlike the libation, however, Cecil Payne's version of Scotch and Milk requires no such effort. It's a smooth, satisfying swinger form the first note to the last. - Leonard J. Bukowski