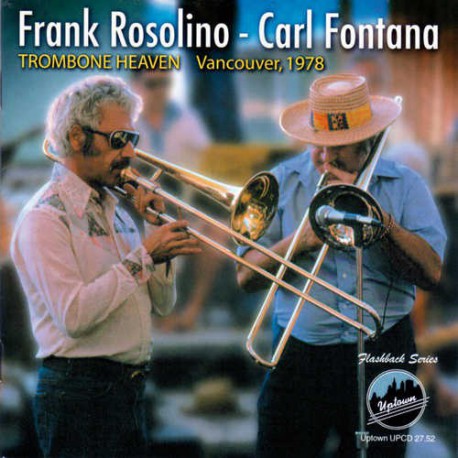 Notify me when available
Trombone fans, rejoice! Uptown Records has found a rarity, a live August 1978 recording of trombone giants Frank Rosolino and Carl Fontana.  Recorded in an intimate setting of a small night club in Vancouver, BC, Trombone Heaven finds Frank and Carl in peak form.  Rosolino was a West Coast fixture noted for his up tempo playing and repetitive tonguing.  This session was his second to last recording, made just three months before his death in a tragic murder suicide.

Fontana never received his true recognition as a great trombonist in the general jazz community. Highly respected by fellow jazz trombonists for his fluency and speed, Carl spent most of his later years in Vegas show bands after starting out with the big bands of Woody Herman, Lionel Hampton, and Stan Kenton.  Fontana was not a prolific session leader as he did not have his first album until 1985, when he recorded The Great Fontana.

Therefore, this recording by two "high priests of jazz trombone" as coined by Bill Watrous, in a relaxed setting is a must-buy. Song selection is all standards, ranging from a Van Heusen/Hoagy Carmichael medley of Here's That Rainy Day and Stardust; to Monk's, Well You Needn't and Miles Davis' All Blues. Even Dizzy Gillespie's bop Ow gets a bone workout.

The relaxed non-competitive atmosphere allows each co-leader to really stretch out in their solos as all but one of the tracks exceeds ten minutes and two are over fifteen minutes-over 79 minutes in total.  It's truly trombone heaven and manna from above for jazz trombone lovers.