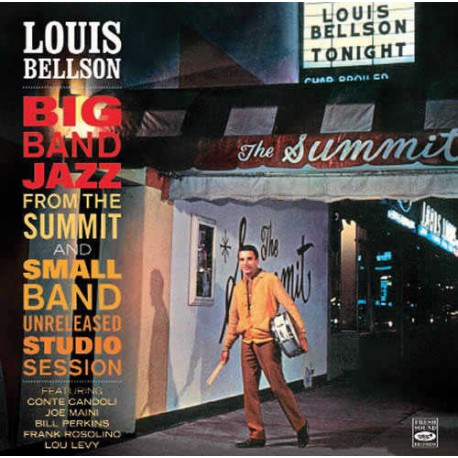 This is the stellar Louis Bellson big band in full flow at The Summit night club in Hollywood in 1962, with the leader consistently tasteful, commanding and propulsive without being obtrusive. Though the band is showcased rather than the players – the fine arrangements come from the cream of West Coast writers like Marty Paich, Shorty Rogers and Banny Carter - there are high-class solo contributions from Conte Candoli, Joe Maini, Bill Perkins, Lou Levy, Jimmy Zito and Carrington Visor throughout. Particularly memorable are Paich’s swinging St. Louie, the power Carter achieves with the full band in Amoroso, and a 3/4 work by Shorty Rogers, With Bells On. The great sound engineer, Wally Heider, the musician’s friend and a master of the electronic esthetics of on-the-spot, big-band recordings, delivered superb recording quality.

No less interesting are Bellson’s previously unreleased small band sides recorded at Hollywood’s United Recorders studio during the two days following the live performances at The Summit. Featured in a set of arrangements by Marty Paich are key soloists of the big band, with the addition of the extraordinary trombonist, Frank Rosolino, on a refreshing, disciplined and buoyantly swinging session.

[1-12] from the Roulette album Big Band Jazz from The Summit: