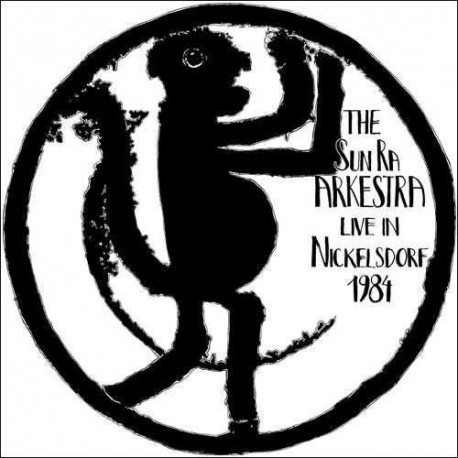 "Ra and his Arkestra recorded and performed prolifically during its entire run, so it's no surprise that we've been showered with great reissues and previously unreleased material. One of the most satisfying documents—and a stellar example of what a primo Arkestra set was like during the band's final decade—is The Sun Ra Arkestra in Nickelsdorf 1984 (Trost), a whopping three-CD set that captures the entirety of a multiset performance in Austria. The group moves easily between standards like Ellington's "Sophisticated Lady," a raucous "Mack the Knife" (with what appears to be winds player James Jackson doing his best Louis Armstrong impersonation), and Fletcher Henderson's "Big John's Special" to originals like "Nuclear War" and "Fate in a Pleasant Mood" and disciplined but wild group improvisations—with especially excellent playing from Allen, John Gilmore, Danny Thompson, and the pianist himself. There's also a bounty of great call-and-response passages, with Ra improvising his lyrics and the Arkestra never missing a beat. The breadth, fluidity, and sense of fun are nothing less than breathtaking. I was lucky enough to see the Arkestra many times during the 80s and 90s, and I always came away from those performances certain I had just seen the greatest band on earth, and the most entertaining one too. Below you can listen to a typically charismatic, soulful take on another Arkestra classic, "Love in Outer Space."  - Peter Margasak