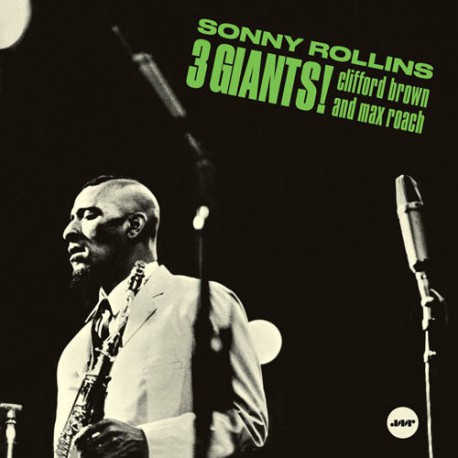 The Roach-Brown quintet started its short run at the beginning of 1954. The first formation included tenor saxophonist Teddy Edwards, bassist George Bledsoe and pianist Carl Perkins, in addition to Max and Brownie. This group was recorded just once, during a concert at the Pasadena Civic Auditorium in April 1954. Edwards, Perkins and Bledsoe left for different reasons soon after, and it was necessary for Max and Clifford to get new musicians. The piano and bass chairs were soon filled by bassist George Morrow and pianist Richie Powell (Bud Powell’s younger brother), while Harold Land was chosen to fill the void on tenor saxophone. This would be the personnel on most of the quintet’s recordings. The tenor chair would change hands at the tail end of 1955, when Land returned to Los Angeles (for family reasons), which set the stage for the young Sonny Rollins to step in.

Rollins’ style proved a perfect fit for the group’s extraordinary equilibrium between fast (and we mean really fast!) tunes anddelicate, romantic, ballads, all combined with careful arrangements (mostly written by pianist Richie Powell). However,this fantastic formation was destined to end in tragedy, for in the early morning hours of June 26, 1956, Clifford Brown died in a car accident (at the age of 25) along with pianist Richie Powell and Powell’s wife. In the short time between Rollins’ arrival and Brownie’s death, the group had the chance to enter the recording studios on three occasions (they were, nevertheless, privately recorded live at several venues).

The results of those three sessions –the quintet’s only official legacy –originally appeared on two albums: Clifford Brown and Max Roach at Basin Street and the album reissued here, "Sonny Rollins Plus Four" (later reissued as Three Giants!).