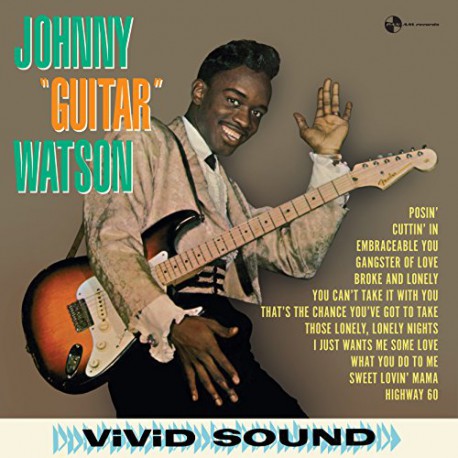 “Watson was not just a guitarist: the man was a master musician. He could call out charts; he could write a beautiful melody or a nasty groove at the drop of a hat; he could lay on the harmonies and he could come up with a whole sound.” – Etta James This essential vinyl edition presents Watson’s underrated debut album, Johnny “Guitar” Watson, originally issued by King Records in 1962 and long unavailable on vinyl. The LP contains a collection of studio recordings taped in the early 1960s, most of them produced by the great Johnny Otis (with label manager Syd Nathan as executive producer). The material consists of classic blues songs (“Those Lonely, Lonely Nights”, which was mistitled on the original LP as “Those Lonely, Lonely Feelings”); soulful R&B flavored blues (the Top-10 smash “Cuttin’ In”, and “Posin’”); dance numbers with catchy horns and a rolling piano played by Ernie Freeman (“What You Do to Me”, “Sweet Lovin’ Mama”), as well as touching ballads (“I Just Wants Me Some Love”).

The LP even contains a Tin Pan Alley standard with strings (“Embraceable You”). Some of these cuts offer a conscious effort by the King label to cast Watson in a Ray Charles mold, particularly on “Broke and Lonely” and the aforementioned “I Just Wants Me Some Love”. One of the tracks featured here would even provide Watson’s nickname: The “Gangster of Love” (the song was originally cut for the Keen imprint in 1957, but was added to this album with an overdubbed horn section, as the King label sought to make the tune more commercial to gain more listeners). The signature blues piece was successfully covered by rock musician Steve Miller in 1968, and again by Watson himself in 1978.

In addition to the original album, this collector’s LP includes 4 bonus tracks, consisting of the great “Looking Back” (covered by John Mayall’s Bluesbreakers in 1966, and by Dr. Feelgood in the mid-70s), the rocking “Deana Baby”, the slowly simmering “One More Kiss”, and the electric blues number “Gettin’ Drunk”.

Recorded in Los Angeles, California, 1961-1962. With the exception of “Gangster of Love”, probably recorded in 1958. Original recordings produced by Johnny Otis.