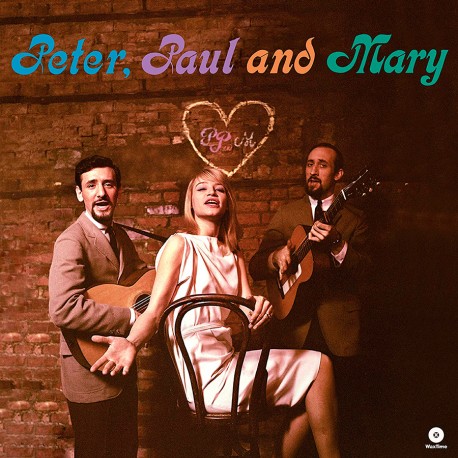 This Waxtime Records reissue features the trio’s sensational self-titled first album, released in March 1962 by Warner Brothers: Peter, Paul and Mary. This masterpiece showed the young group’s incredible sense of professionalism. The angelic voice of Mary Travers blends with Peter Yarrow’s tenor and Paul Stookey’s bass on some gorgeous harmonies. The LP reached number one on the charts and sold two million copies. This classic recording helped to bring modern folk stylings to a mass audience for the first time. Meticulously produced in New York City by Bob Dylan’s manager, Albert Grossman, it includes the hit singles “Lemon Tree” and “If I Had a Hammer”, and won in its time Grammy Awards for Best Performance by a Vocal
Group and Best Folk Recording.

This quintessential LP has been remastered and packaged in this special collector’s edition, which also includes 3 bonus tracks that were recorded live in the early ‘60s. The bonus material consists of splendid covers of Bob Dylan’s “The Times They Are a’ Changin’,” Blind Lemon Jefferson’s ballad “One Kind Favor,” and a bracing re-interpretation for three interwoven voices of Reverend Davis’ “If I Had My Way” (which is even better than their studio recording of the same song).