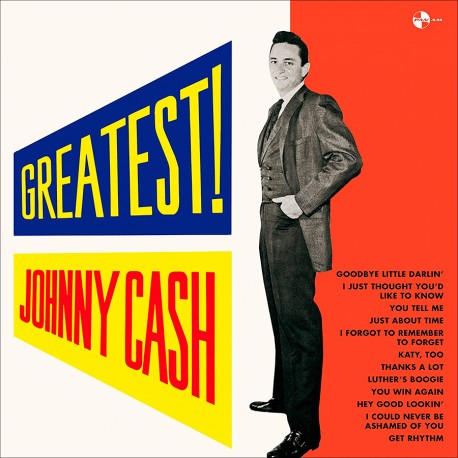 Presented here is Johnny Cash’s fourth album, Greatest!, which was released on Sun Records on January 12, 1959. It was Cash’s third work on the label, which he had left the previous year to join Columbia Records. By the time the album was released, Cash had already recorded The Fabulous Johnny Cash, his first album with Columbia. This overlap would continue until 1964 with Sun releasing additional albums and singles of previously unreleased material in parallewith Cash’s Columbia releases. Greatest! contains a collection of B-sides and unreleased tunes Cash had left behind when he parted ways with Sun to sign with Columbia in 1958.

The tracks were recorded between July 1955 and July 1958, and six out of the twelve songs became singles, with “Get Rhythm” topping the Country charts. There are a handful of gems to be found here in addition to theaforementioned tune: a fine cover of Charlie Feathers’ “I Forgot to Remember to Forget,” a pair of solid Hank Williams interpretations, “YouWin Again” and “Hey Good Lookin’”, and his tribute to the singular talents of guitarist Luther Perkins, “Luther’s Boogie.” While Sam Phillips and his staff polished a few of these tunes with overdubs after the fact, they still sound leaner and more intense than Cash’s early Columbia sides, and while Greatest! is not considered the best album from his Sun period, there’s still some great music here from one of the most powerful voices in the country genre. In addition to the original LP this newly remastered reissue also includes 4 bonus tracks from the same period.