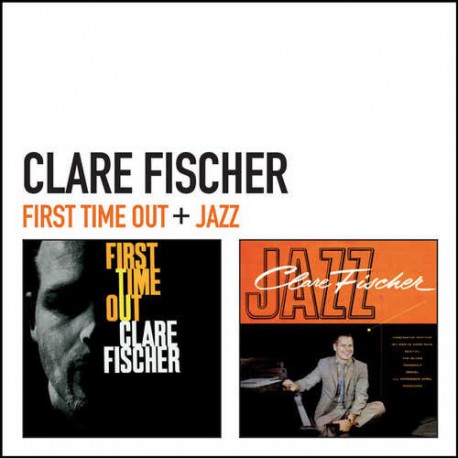 5 STARS DOWN BEAT MAGAZINE
This release contains two complete original LPs by Clare Fisher. First Time Out (Pacific Jazz PJ52) received the maximum five-star rating in Down Beat magazine and presents Fischer in a trio format with the splendid Gary Peacock on bass. Our companion LP, Clare FischerJazz (RCA Victor Mexicana MKL-1433) marks Fischer’s debut album as a leader. It is a true rarity and appears here ON CD FOR THE FIRST TIME EVER. The album was recorded in 1961 during Fischer’s visit to Mexico, and showcases him backed by competent local musicians. All but three of the eight tracks from this LP feature the pianist in a trio format!. The repertoire consists of a selection of jazz standards and compositions by Fisher, who arranged all of the tracks. With the exception of “Fascinating Rhythm”, which he has previously recorded with the Hi-Lo’s in 1958, Fisher never recorded any of the tunes from the Mexican album again!!
PERSONNEL: