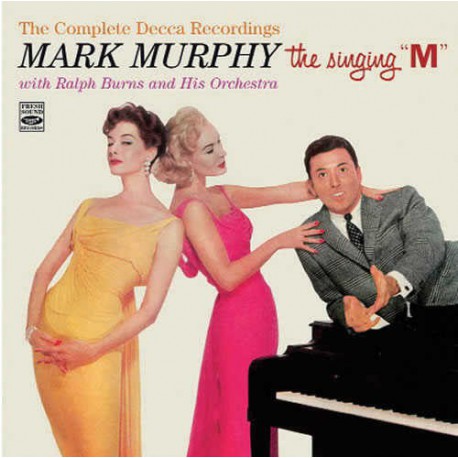 Here backed by brilliant Ralph Burns jazz-flavored arrangements, he weaves magisterially through a variety of moods and tempos. Listen to his versions of Fascinating Rhythm, Limehouse Blues, Exactly Like You and Give It Back to the Indians, all included in his first Decca album “Meet Mark Murphy,” and it’s clear why Billboard saluted him in 1956 as one of the smartest, most unusual talents around. “Murphy sings with a modern jazz feeling, and like an instrument. His unorthodox phrasing and sophisticated manner will register especially with hip deejays.”

The reviews were equally flattering when his second Decca album “Let Yourself Go,” came out late in 1957. Elmer’s Tune, ’Taint No Sin and I Got Rhythm are among the best of numerous outstanding vocal performances. His phrasing is relaxed and distinctive, the voice totally under control and the intonation spot-on. With so much at his command and his uninhibited patter and scat singing, he remains a jazz singer to the manner born, capable of projecting his qualities regardless of context. And, courtesy of Ralph Burns, he has a fine setting here.

MARK MURPHY sings in all tracks, accompanied by Ralph Burns an His Orchestra.