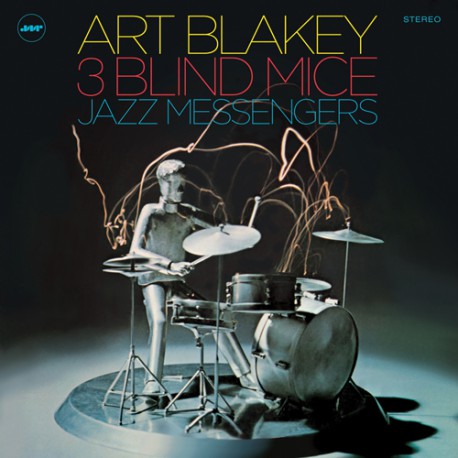 The sextet heard on "Three Blind Mice" (United Artists UAJ 14002) featured Freddie Hubbard, Curtis Fuller, Wayne Shorter, and Cedar Walton, and is widely regarded as one of the finest formations of Art Blakey’s legendary Jazz Messengers. It began its run in 1961 with the LP Mosaic. By that time the bassist was still Jymie Merritt, who would later leave the group and be replaced by Reggie Workman. The band had first tried to record the album live at the Village Gate, in New York, on August 17, 1961. But something must have gone wrong, for most of the material taped that evening was rejected. The second studio album by this formation of the band was Buhaina’s Delight, recorded on November 28, 1961. Then comes the March 18, 1962 live recording at the Renaissance Club in Hollywood, which produced all ofthe music from "Three Blind Mice".

All tracks recorded live at the Renaissance Club, Hollywood, March 18, 1962.

(*) Bonus track: From the same date, but not included on the original LP.