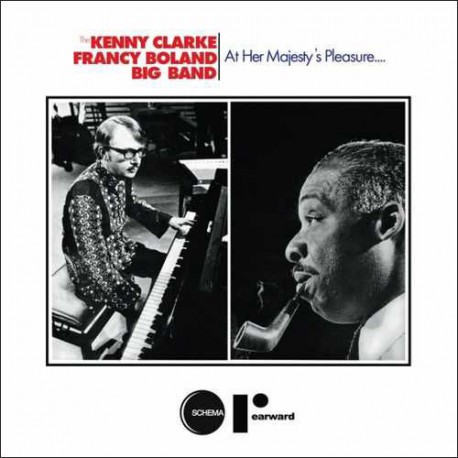 "The Clarke-Boland Big Band have once again affirmed their intention to keep the very best of the big band tradition alive. Great big bands are always to be treasured. Treasure this one."
Bob Houston

Inspiration in jazz has many sources.
Who would have thought that British prisons could have inspired a Belgian-born composer, arranger, co-leader of a truly international band? The fact is that when the Clarke-Boland band came to this country at the beginning of 1969 for their memorable booking at the Ronnie Scott Club tenor saxophonist Johnny Griffin was, to quote the sleeve "whisked off to Pentonville". It was nothing worse than a question of outstanding income tax from a previous visit and Griff was soon restored to the band ranks. But the incident gave Francy Boland a title for the nameless piece of music. Having written Pentonville, Boland then went on to complete the suite, using the prison idea as a convenient peg on which to hang the titles.
The LP was made in Cologne in September 1969 and has some magnificent playing by the soloists and the ensemble.
The opening track, Pentonville, features some delicious Sulieman trumpet leading to one of Boland's rare piano solos and the pensive tenor of Ronnie Scott. Ake Persson's masculine sounding trombone also comments on the predicament before the band unravel that glorious wall of sound which is one of their trademarks.
The second theme, Wormwood Scrubs, should prove evocative: dawn comes very abruptly, whatever peace there may have been, shattered by the appearance of the three tenors, Griffin, Ronnie Scott and Tony Coe and another day begins in Her Majesty’s famous London penal establishment. The tenors all contribute beautifully virile solos followed by a lovely "singing" effort by Derek Humble and a forthright gem from the trumpet of Kenny Wheeler.
Doing Time is just that! Klook and Kenny Clare out in the yard at exercise. A fabulous tour de force and a forcible reminder of just why this band swings like no other.
Broadmoor , perhaps the most notorious of Britain's penal institutions. Francy sees not so much mental unbalance, musically, as one might expect although some of the solos teeter occasionally on the edge of harmonic stability. Ronnie gets off a great, wailing solo before Shihab's fluent soprano saxophone paves the way for the three tenors to rejoin the rumble. Holloway, a beautiful ballad in which Tony Coe’s tenor sympathises with the desolation of being, stuck behind bars.
Reprieve, a joyous theme carried by glorious saxophone ensembles and proclaimed exultantly by the tremendous Benny Bailey solo, with Derek Humble and Sahib Shihab (this time on baritone) adding their congratulations.
Going Straight brings back one of the Suite's main themes, contains declarations of good intent from the whole band, either collectively or individually, with Derek Humble's alto and Tony Coe's clarinet outstanding.