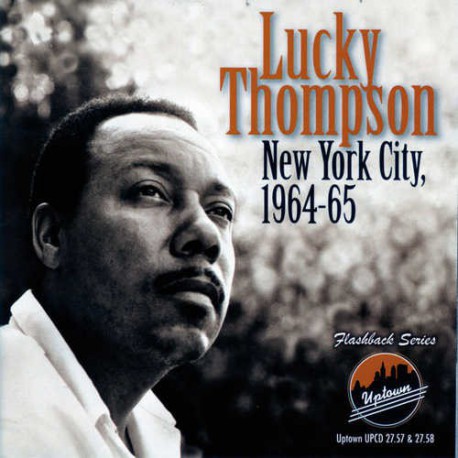 Uptown is proud to issue this set featuring the great Lucky Thompson in New York City in 1964 and 1965. Presented in fully restored audio, one hears Lucky in a late night club setting at the Half Note and in a concert atmosphere from the Little Theater in downtown Manhattan. Frequently based in Europe, these rare Stateside recordings display the brilliant musician on both the tenor and the soprano sax - surrounded by friends both in the audience and on stage.

These previously unreleased live sessions from saxophonist and composer Lucky Thompson were done when he was at the zenith of his performing career, and unfortunately close to the end.  Upon the release of his critically acclaimed album Lucky Strikes, Thompson performed in New York City at the Little Theatre in 1964, and over the airwaves of WABC-FM at the Half Note in 1965 with an octet and a quartet, respectively.  At the time, Thompson was playing much more on the soprano than tenor saxophone, and in many ways paved the way for what John Coltrane would accomplish on a purely improvised level. Where Thompson differentiated was in a cooler, unforced, melodic arena that still has not been recognized as an original approach.

Perhaps these recordings will deservedly elevate him to a higher regard, as his playing here is nothing short of marvelous. The larger ensemble is only ostensibly unleashed on two selections, one being the diffuse and developed ballad to swinger "Minuet in Blues" with wonderful harmonic frames established by Thompson's soprano, the alto sax of Danny Turner, the baritone of Cecil Payne, and trumpeter Dave Burns. The other is "Firebug," a jumpin' bopper with the leader switching to tenor, urged on by the calypso flavored mainstem drumming of Al Dreares and the superlative bassist Richard Davis, sporting a sub-chorus and fine solos by pianist Hank Jones, Payne, trombonist Benny Powell, and Davis. Thompson's "Theme," written for these recordings, bookends the octet tracks and quartet pieces with the rhythm section, including his famous modal "The World Awakes" which is a notable feature for the ever clever Jones, while "'Twas Yesterday" evokes a sad, reflective mood via Thompson's understated tenor.

Where the 1964 set features a completely original program penned by Thompson, the radio broadcast mixes a remake of "The World Awakes" with standards, introductions, interjections, and interviews by DJ Alan .Grant. Of the well known tunes, the ballad "What's New?" displays Thompson's controlled and refined approach that initially influenced Coltrane's first forays on soprano.
While the stretched out "Lady Bird" is verbally dedicated to its ailing author Tadd Dameron, who would pass away months later, it seems Thompson -- on tenor -- either didn't know the melody very well, or likely edits it down in a completely deconstructed proportion.
"Strike Up the Band" is recognized by .Grant as a coincidental reference to the Lucky Strikes album, and the band really digs into it, albeit in a rushed manner, after beautifully paraphrasing the legendary "Paramount on Parade" movie theme.
Another version of "The World Awakes" is included, but is quite different because of the smaller instrumentation and Thompson's "indoor" voice.
Pianist Paul Neves is very good here, and was active in N.Y.C. at the time, though he faded into obscurity shortly thereafter upon returning to his home in Boston. Bassist George Tucker does yeoman work here, but passed away eight months later of a cerebral hemorrhage at age 38. The great drummer Oliver Jackson, a friend from Thompson's days growing up in Detroit, is here, but a bit buried in the mix.

Frustrated with the American music business, Thompson expatriated twice to Europe, in Switzerland after these recordings, returned to the U.S. in the '70s to teach at Dartmouth, purportedly drifted between Georgia, Colorado, Canada, Oregon, and Seattle, Washington, eventually suffering homelessness and dementia before dying in 2005 at age 82 of Alzheimer's disease.

As tragic as his life became, these recordings, though minimally flawed, still showcase his world-class talent in a favorable light, and come recommended with no reservations. ~ Michael G. Nastos