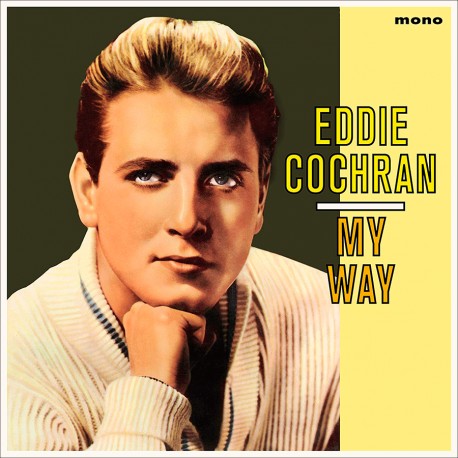 This Vinyl Lovers edition features one of Cochran’s least known LPs, My Way. A compilation album, My Way was only released in the UK by the Liberty label during the ‘60s. It marks the third album issued posthumously for the UK market, where Cochran enjoyed tremendous success. It has never been released in the United States.

The LP includes seven tracks that were issued after Cochran’s death: “My Way” and “Lonely” (which were published on two UK single releases), and “Little Lou” (from a 1958 date), plus four instrumentals cut during Cochran’s final sessions: “Eddie’s Blues”, “Jam Sandwich”, “Hammy Blues” and “Guybo”. The latter four numbers were first released on this album. In addition to the original masterpiece, this collector’s edition contains 2 bonus tracks from the same sessions, which were not included on the original LP.

Recorded at Gold Star Recording Studios, Hollywood, California, between 1956 and 1962.

(*) BONUS TRACKS: From the same sessions, but not included on the original LP.