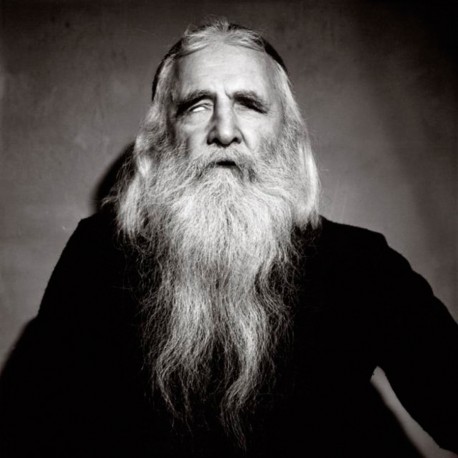 Startlingly restored and remastered at Abbey Road, and sleeved in Richard Dumas’ amazing phographic portraits, this is Moondog at his most modern, direct, original, fresh, playful and let-it-be-said unpretentious — featuring the Honking Geese, Tony Schwartz’s brilliant outdoors recordings (particularly improved in Honest Jon’s new version), with interventions from a ship’s foghorn, a tapdancer and a cocker spaniel, and signature rhythms for trimba, oo, tuji, yukh, and ostrich feathers.

Andy Warhol’s mother got it straight, on the 1957 Prestige cover of Story — ‘Moondog is a poet who versifies in sound, a diarist overcome by love, curiosity and amusement by everything that reaches his ears, all of which he transposes into a symphony of himself. It may be the roar from the streets; it may be the casual chatter in a room or, best of all, it will be that secret music that seeps through imagination and memory.

These experiences, so dull to the dull but so alive to him, he orchestrates into a record of those enchanting conversations everyone can hold with himself would he only listen for a bemused moment. They make up the script of that unique tragi-comedy, the story of anyone’s life. Pricking up our ears would be so easy, yet it is seldom done. But when Moondog compels us to do it, we are entranced and delivered willingly into new worlds of meaning.’