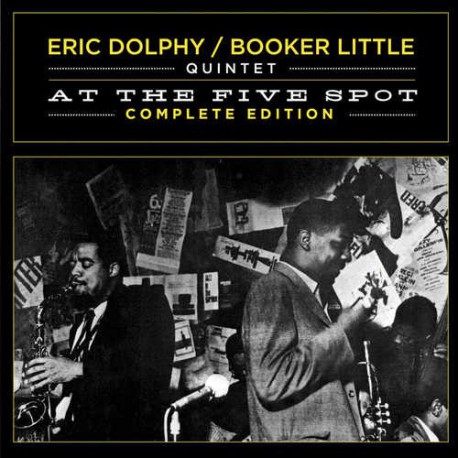 At the Five Spot - Complete Edition

At the Five Spot - Complete Edition

FOR THE FIRST TIME ON A SINGLE SET!

This release presents the complete recordings by the Eric Dolphy Quintet with Booker Little made live at the Five Spot Café in 1961. This material originally appeared on three separate LPs ("Eric Dolphy at the Five Spot Vols. 1 & 2" – New Jazz NJ8260 and Prestige PR7294– and "Memorial Album" – Prestige PR7334). It has become legendary, not only for its high musical quality, but also due to the fact that both talented horn men died at a tender age soon after. Booker Little passed away on October 5, 1961, at the age of 23, and Dolphy on June 29, 1964, at the age of 36.

“Eric Dolphy at the Five Spot presents him at his most relaxed. Here he sounds like part of a larger aesthetic history, not a marginal figure. His band is the reason why. Booker Little, the trumpeter, had terrific energy, joining bebop harmony to wider intervallic leaps; Mal Waldron was at his insistent, monochromatic, stubborn best. This was the only public appearance of a quintet that could have become very basic to modern jazz and didn’t; Little died of uremia less than three months later.” (Ben Ratliff)