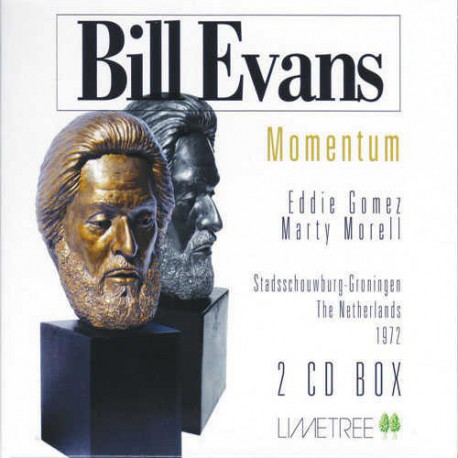 ALL TRACKS PREVIOUSLY UNRELEASED!
In 1969 Bill Evans and his trio gave a concert in the RAI building in Amsterdam, recorded for the album Quiet Now on the Affinity label. It was the first recording to be released of an Evans concert in the Nederlands. The recording of Momentum happened three years later. During a short European tour in 1972, the Bill Evans Trio (with Eddie Gomez on bass and Marty Morell on drums) gave a concert in February 6th at the Maison de l’ORTF in Paris. The concert had been taped and partly broadcast by Radio France. Only in 1988 was it released on two albums, Live in Paris Vol.1 and Vol.2.

On February 4th, two days before the Paris concert, the trio played in Groningen, in a university in the north of the Nederlands. Jan Warntjes, a Dutch pianist and Evans aficionado, taped the concert after making an agreement with Bill’s manager, a woman he belives was Helen Keane. He made a digital copy of the tapes in order to maintain their quality. Jan preserved and cherished these recordings for many years and decided, recently, after nearly forty years, to make them public, feeling that it would be a shame if they were lost. Momentum offers yet another confirmation of Bill Evans’ musical heritage and, with perfect music quality.

The original tapes of these live recordings have not been altered or enhanced in any way except to transfer them on to a digital format. The order of the performance has not been changed and only “Nardis”, the last selection on the concert, fades out because the recording engineer ran out of tape.

Nenette Evans, Bill’s widow, when asked to propose a title for the current album, offered this answer: “At The time of this recording in 1972, Bill was experiencing a momentous upswing in his personal life, his health and his career, so I would like to give the album the appropriate title of Momentum”.

“The sweetest plum of all is the nine minute, thirty-seven second track of the Scott Lafaro tune, Gloria’s Step. Eddie and Bill both approach this song very personally, since Scotty’s style of playing was responsible for central “engine” of the trio. There is fantastic interplay between bassist and pianist. Some of the call and response happens in microseconds, so listen carefully. Try slowing the recordings down digitally to appreciate it even more.

This one track is worth the price of the CD.” Win Hinkle, bassist, editor and publisher of Letters From Evans