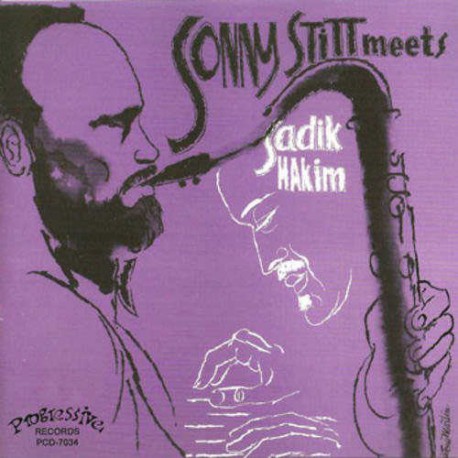 Indeed. It’s about time. Stitt and Hakim both cut their musical teeth in the bop era and it’s amazing that they haven’t met before this. Hakim, when he was still known as Argonne Thornton, played piano on the Charlie Parker’s earliest dates (the one that produced KoKo for Savoy) and he was also at the keyboard when Dexter Gordon cut one of his first for that label in the late 1940’s. Over the years, Hakim paid his duties working with Ben Webster, Lester Young, James Moody and Buddy Tate, but he never recorded with Stitt.

Well this swinging session makes up for lost time. Stitt plays a couple of tunes here he first recorded in the early bop days with Bud Powell – “All God’s Children Got Rhythm” and “Fine and Dandy”- but Hakim provides a lighter and totally different comping for the swinging tenor of Stitt.

These tunes are also a pointed reminder that as musical trends and fads have come and gone over the years, Stitt has remained a solid rock of dependable mainline straight-ahead swinging jazz.

Sonny also plays alto on four of these 8 selections and his work, particularly on his horn, shows his strong roots in Bird. Listen especially to “Round Midnight”. It has been suggested that his similarity to Bird was once a source of embarrassment that prompted Stitt to concentrate on the tenor for a time. Now he can take pride in his capable efforts in the tradition of Bird.

The album’s a well-balanced one of pop standards – “Little Girl Blue”, “Easy To Love” and “Fine and Dandy”; current pop “You Are The Sunshine of My Life”; jazz standards “All God’s Children” and “Round Midnight”; and original blues “Christopher Street Jump” and “South Georgia Blues”.

The Stitt unit here is rounded out by the capable bass of Buster Williams and the interesting contrast of the light tasty drumming of J.R. Mitchell. Hakim recalls of Mitchell “He didn’t get in anybody’s way and he kept good time”. What more could anyone want from a drummer.
An interesting point about these two musicians whose paths have run parallel but not until now crossed: Hakim’s grandfather was a music professor while Stitt’s father was also a music professor. That ought to be reason enough for Sonny Stitt and Sadik Hakim to have met.
–“ Douglass E. Hall”-