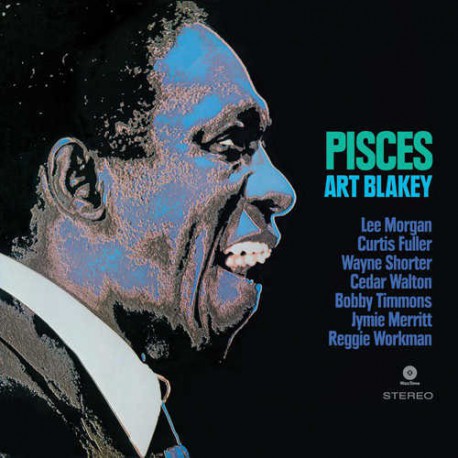 (*) BONUS TRACK: From the same sessions but not included on the original LP.

The formation heard on most of Art Blakey’s LP Pisces (Blue Note GXF 3060) marks the third incarnation of the drummer’s legendary Jazz Messengers, with trumpeter Lee Morgan, tenor saxophonist Wayne Shorter, pianist Bobby Timmons, bassist Jymie Merritt, and the leader on drums. After an initial trial with Clifford Brown and Lou Donaldson in the front line, the first stable formation of the band, in 1954, consisted of Donald Byrd, Hank Mobley, Horace Silver and Doug Watkins, while the second one, in 1957, included Bill Hardman, Johnny Griffin – or Jackie McLean – Sam Dockery and Spanky Debrest. Benny Golson was the tenor saxophonist for a short time in 1958-59, and also acted as the group’s musical director. He wrote several jazz standards which began as part of the band book, such as “I Remember Clifford”, “Blues March”, “Along Came Betty” and “Are You Real?” Many of these songs would be revived by later incarnations of the group. Lee Morgan was only 22-years old at the time most of the sessions on this LP were taped. His recording debut with Blakey had taken place at a date featuring an expanded version of the Jazz Messengers (called “The Jazz Messengers Plus Four”) on April 2, 1957. On April 6, the drummer hired him again for a septet session including John Coltrane.

They would record together twice in early 1958 as sidemen for dates conducted by organist Jimmy Smith (February 28) and tenor sax player Tina Brooks (March 16) prior to the first authentic session of the third Jazz Messengers, which took place in Rudy Van Gelder’s Studio, in Hackensack, New Jersey, on October 30, 1958. The date would mark the beginning of a long and stable musical relationship that would last until 1965, seven years before Morgan was shot dead (at 33-years old) by his common law wife during an argument.