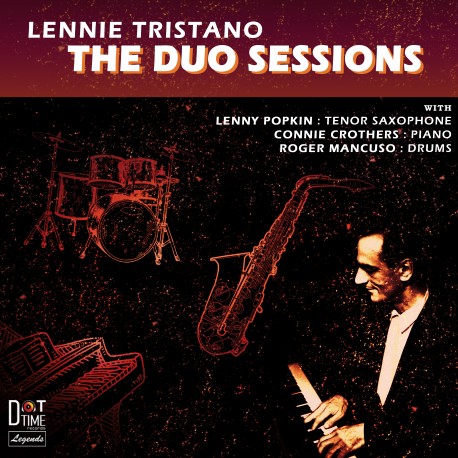 According to Tom Lord's discography, Lennie Tristano's last recordings were made in Europe in 1965-66. However, the legendary pianist died in 1978, so there was an enormous musical gap to fill. Tristano declined offers to perform in the 1970s; he explained that he did not like to travel and that the requirement for a career-minded musician to play concerts was not something that he wanted to follow. The new Dot Time release LENNIE TRISTANO –THE DUO SESSIONS, then, not only fills the gap but also puts together a wonderful set of new music by the immortal pianist. It consists of three previously unissued privately recorded duo sessions (lasting 70 minutes) which cover the period 1967-1976. The first six tracks, taped on October 15, 1970, have Tristano in duets with tenor saxophonist Lenny Popkin, who worked with Eddie Gomez and, more recently, with Lennie Tristano's daughter, drummer Carol Tristano, who also authored the liner notes for this release. Then come two free improvisations in a piano duet with Connie Crothers taped in 1976 (Crothers also recorded a duet album with Tristano's guitarist son Bud). Finally, we have eight duets with drummer Roger Mancuso (a frequent collaborator of Crothers). Although it sounds as if the three sessions were recorded at Tristano's home, rather than in a professional studio, sound quality is particularly good and the music is always interesting, putting in evidence that, even if he stopped playing concerts, Lennie Tristano never lost his musical magic.