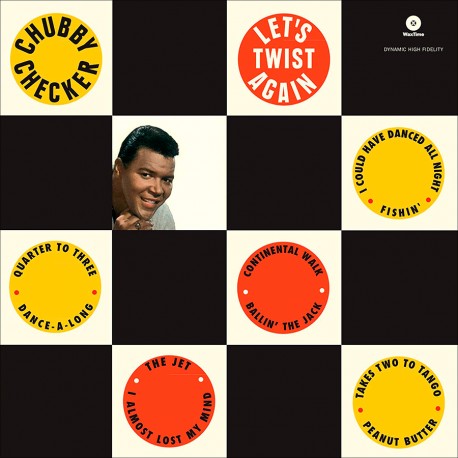 This edition contains Chubby Checker’s celebrated LP, Let’s Twist Again, originally issued on the Parkway label in 1961, and long unavailable on vinyl. Naturally, the aforementioned hit “Let’s Twist Again” is included, as are some of the singer’s highlights like “The Jet,” “Ballin’ the Jack,” “Dance-A-Long,” etc., and a host of other dance-craze songs, such as “The Continental Walk,” “Peanut Butter” and the humorous “The Ray Charles-Ton.” Throw in a couple of R&B covers, like “I Almost Lost My Mind” and Gary U.S. Bonds’ staple “Quarter to Three” and you have a formidable soundtrack to keep moving your hips.

Despite the many variations on a few themes, Chubby Checker threw himself into each song as if it were brand new, and the Cameo-Parkway house band (including the fat sax tone of Buddy Savitt, and a great rhythm section featuring Joe Macho on bass and either Bobby Gregg or Joe Sher on drums) swung hard on everything it played.

In addition to the original masterpiece, this WaxTime collector’s LP contains 2 bonus tracks from the same period, consisting of the catchy “Toot,” and the joyous dance-floor stomper “The Fly”.

This release is a perfect choice for anyone looking to explore Checker’s finest
recordings from his most prolific period. Enjoy it!