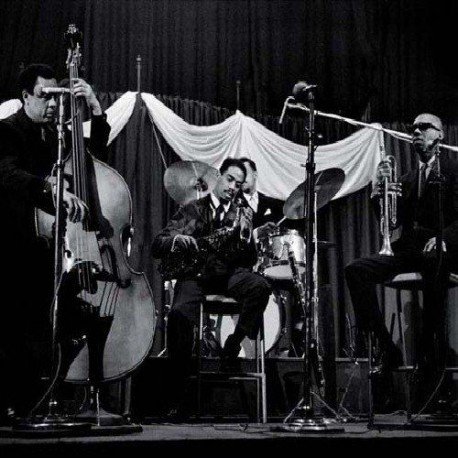 The complete long unavailable concert by Charles Mingus and Eric Dolphy at the Concertgebouw in Amsterdam.
The concert appears here with the exact performance order for the first time ever on CD, including nearly three minutes of Mingus' solo on "Fables of Faubus" that were absent from every previous CD issue.
This is the first preserved performance by the sextet during that 1964 European tour


In April 1964 the Charles Mingus Sextet with Eric Dolphy began a three week European tour. Many performances by the Mingus Sextet in Europe have been preserved, mostly by local radio and TV stations. This material would prove invaluable given the fact that Dolphy, who had decided to leave Mingus (hence the title of the bassist’s composition “So Long, Eric”) and stay in Europe, died in Berlin from a diabetic coma on June 29, 1964, at the age of 36. The concert at the Concertgebouw in Amsterdam taped on April 10, is the first preserved set by the group during that European tour (the group had already been recorded twice in the United States, during a recently discovered March 18, 1964 set at Cornell University in Ithaca, New York, and at New York’s Town Hall on April 4).