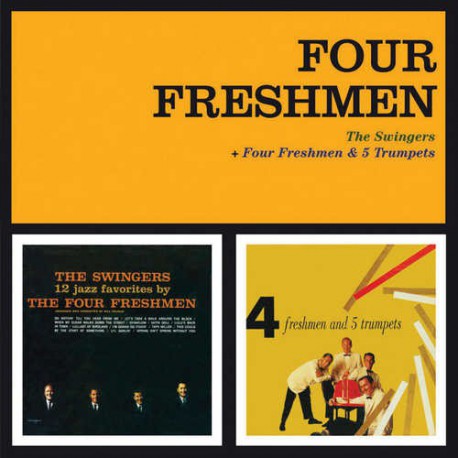 The Swingers + Four Freshmen and 5 Trumpets

The Swingers + Four Freshmen and 5 Trumpets

This edition presents two complete original albums by the Four Freshmen, which was one of the finest jazz vocal groups from the 1950s. These outstanding LPs are The "Swingers" (Capitol T1753) and "Four Freshmen and 5 Trumpets" (Capitol T763). While the former features the Freshmen backed by a big band arranged by Bill Holman, the latter showcases them along with star trumpeters, among them Pete Candoli and Mannie Klein, plus Shelly Manne on drums. As a bonus, two rare tunes that complete the sessions from Four Freshmen and 5 Trumpets but were not included on the original LP.

Bonus tracks (25-26): From the "Four Freshmen and 5 Trumpets" sessions, but not included on the original LP.

01 Lulu’s Back In Town
02 Li’l Darling
03 Let’s Take A Walk Around The Clock
04 Dynaflow
05 Do Nothin’ Till You Hear From Me
06 Spring Isn’t Spring Without You
07 Taps Miller
08 When My Sugar Walks Down The Street
09 Satin Doll
10 This Could Be The Start Of Something Big
11 Lullaby Of Birdland
12 I’m Gonna Go Fishin’
13 Easy Street
14 Ev’ry Time We Say Goodbye
15 Laughing On The Outside (Crying On The Inside)
16 After Yot've Gone
17 Goodbye
18 There Will Never Be Another You
19 Got A Date With An Angel
20 Something In The Wind
21 Someone Like You
22 The Night We Called It A Day
23 Give Me The Simple Life
24 Goodnight, Sweetheart
25 Lonely Night In Paris
26 (I Love You) For Sentimental Reasons