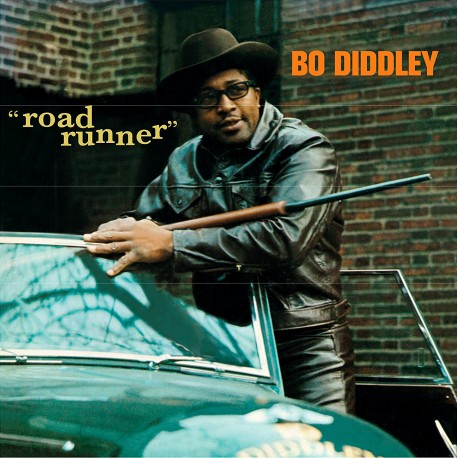 This remastered collector’s item includes one of the lesser-known LPs Bo Diddley recorded for Chess’ subsidiary, Checker Records: Road Runner. Most of the material here was rushed out in half-finished form, in order to get an album out that cashed in on the “twist” craze of early 1962. This album has also appeared, with different cover art, as Bo Diddley Is a Twister. There may well have been words intended for the opening track, “Detour”, which came out of the 1961 session featuring Peggy “Lady Bo” Jones that also produced the excellent “Pills” and the rather perfunctory reading of Willie Dixon’s “My Babe”.

In addition, the record contains some lackluster earlier instrumental material, such as “Shank” and “The Twister” (both recorded in late 1960 at Bo Diddley’s home studio, in Washington, D.C.). It also includes a smoking reading of “Here ‘Tis”, the soulful Bo Diddley original that would serve a young Eric Clapton –during The Yardbirds’ era– in very good stead on stage (Diddley’s version is far superior to Clapton’s), as well as the classics “Road Runner”, “Hey!, Bo Diddley” and “Who Do You Love?”. Between hypnotic and rhythmic guitar lines and swaggering vocals, these songs capture a young Bo Diddley at his raw and primal best, while confirming that even at the onset of his career he didn’t sound like anyone else in rock & roll.
In addition to the original masterpiece, this Vinyl Lovers remastered reissue contains 2 bonus tracks from the same period.