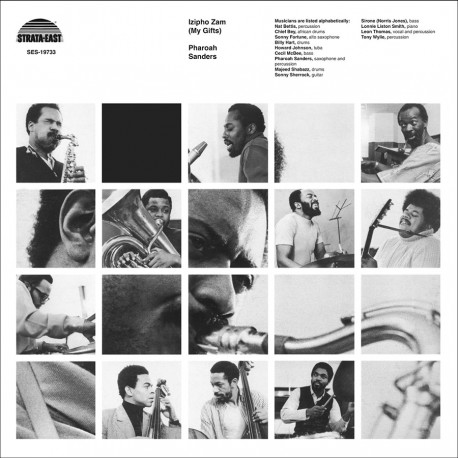 Back in the day knowledgeable jazz collectors flipping through bins would always pause when a release from Strata-East, invariably adventuresome, appeared. Izipho Zam is a clear example. Recorded in January of 1969 with Clifford Jordan as producer, and eventually released by Strata-East in 1973, reflects Sanders’ Afro rhythms and spiritual influences, if not in full flower, then in full development. This was only the second album Sanders recorded as a leader, but its delayed release put it on record-store shelves next to recordings made several years later for Impulse. A stellar group of musicians joined Pharoah Sanders: Sonny Fortune on the saxophone, vocalist Leon Thomas, Sonny Sharrock on guitar, Billy Hart and Majeed Shabazz on drums as well as Chief Bey on African drums, bassists Cecil McBee and Sirone, pianist Lonnie Liston Smith, Howard Johnson on tuba and percussionists Nat Bettis and Tony Wylie, who are also joined by the ensemble adding extra textures and colour with the array of percussion instruments.