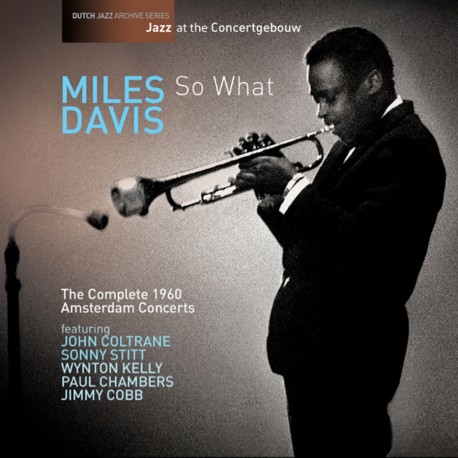 So What - Jazz at the Concertgebouw

So What - Jazz at the Concertgebouw

Some performances get talked about decades after they happened. It's all about "you had to be there" and if you would believe all the people who claimed to be present at such a show, the venue would have collapsed. Two of those shows are now released in full. Trumpet maestro Miles Davis performed at the Concertgebouw in Amsterdam on April 9 and October 15, 1960. John Coltrane was on sax in April and his replacement Sonny Stitt played in October. With Wynton Kelly on piano, Paul Chambers on bass and Jimmy Cobb on drums. Miles Davis was on fire both nights.

The shows were recorded professionally for Dutch radio and have been gathering dust in the vault of the Dutch Jazz Archief. This organisation has gotten into serious financial trouble recently, losing its government .grant. So What - The Complete 1960 Amsterdam Concerts is the seventh release in their Jazz at the Concertgebouw series. The fabled acoustics of the concert hall and the good ears of the recording engineers ensure the high standard of the CD's, with extensive liner notes. Dutch jazz enthousiast and journalist Bert Vuisje attended both Miles Davis shows and his notes offer a first hand eyewitness report.

Half of the the audience hated the April show and walked out - it's hard to imagine why nowadays, but they just couldn't handle the new approach of Davis and his fellow musicians. During the October concert the audience was far more receptive fro the sonic explorations of uncharted modal jazz waters . Most of them had listened to the groundbreaking Kind of Blue album by then, so the stretched melodic lines on top of the swinging perfection of the rhythm section were welcomed with open arms.
DISC 1: