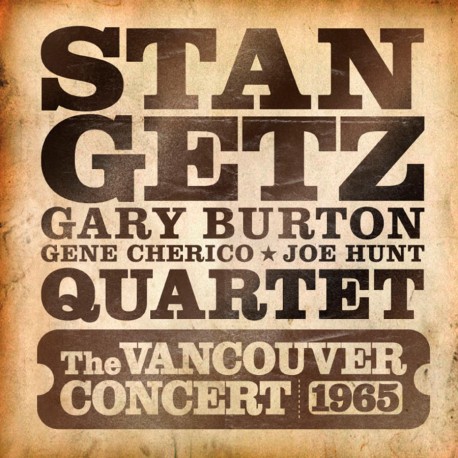 A rare 1964 Vancouver concert by the Stan Getz Quartet with Gary Burton for the first time ever on CD. As a bonus, two more very rare performances, Getz's quartet set at Newport '61 (these are Scott LaFaro's last recordings!) and two tracks taped at the Apollo Theatre with an orchestra led by Getz and featuring Zoot Sims and Gerry Mulligan.

It was 1964 and Stan Getz was having a problem finding a pianist for his newly constituted quartet. Then apparently someone (reportedly Lou Levy) suggested that instead of a piano player, Getz could hire a young vibraphone player named Gary Burton. It was a fortuitous choice but this piano-less quartet was one of Getz's more interesting and musically enterprising groups. The Vancouver performance, recorded in Canada on January 30, 1965 presents the group at its best in a quiet and relaxed set. As the absence of applause indicates, this is not a live performance, but a recording made for radio broadcast. Nevertheless, Getz announces the tunes as if he were in front of a live audience. The music is delightful all the way and all the members of the group shine. The first of our bonus performances presents the Stan Getz Quartet at Newport in 1961. This time there was a pianist (Steve Kuhn) along with bass and drums. The classic bebop player Roy Haynes is on drums, and on bass is none other than Scott LaFaro who would die in an automobile accident at the age of 25 on July 3, 1961, only three days after these Newport recordings with Stan Getz were made. These are his last preserved recordings. The last two tunes find Stan Getz at the celebrated Apollo Theatre on August 17, 1950, a day in which he shared the program with Charlie Parker and Strings and Sarah Vaughan. Both tunes date back to Getz and Zoot s collaborations with Woody Herman in the late forties