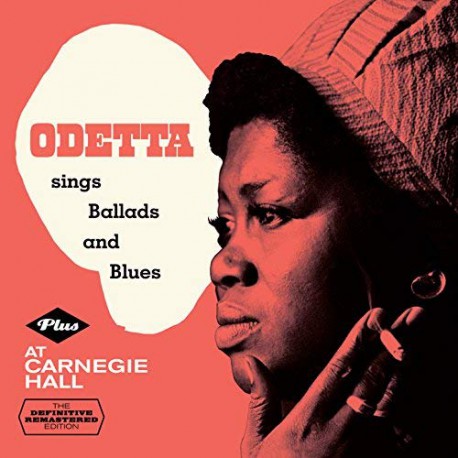 Martin Luther King, Jr. called Odetta the Queen of American folk music. She was one of the first female singers to forge the bond between traditional folk music and more contemporary forms, such as the blues, gospel music and protest songs. With her strong, booming voice and spare guitar, she sang songs about the lives of bluecollar workers and convicts, housewives and peasants, blacks and whites.

This quintessential release includes two of Odetta’s finest albums from her most inspired years: the influential 1956 LP Sings Ballads and Blues (Bob Dylan once said that this record inspired him to trade in his electric guitar and amplifier for an acoustic guitar), and the long unavailable At Carnegie Hall, released on the Vanguard label in 1960.

These two albums have been remastered and packaged together in this very special collector’s edition. Both masterpieces are widely regarded as landmarks of the late-‘50s/early-‘60s folk & blues revival.

ODETTA HOLMES, vocals and guitar, plus:

Recorded in San Francisco and New York, between 1956 and 1960.
Original recordings produced by Dean Gitter.