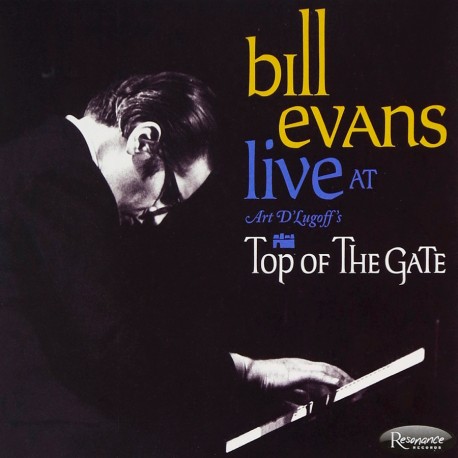 Live at Art D`Lugoff's Top of the Gate

Live at Art D`Lugoff's Top of the Gate

You are about to be transported back in time. Jazz in the 1960’s, the Golden Era of Jazz. This is a time capsule document unlike any other. We have a ticket for you, up-close, front and center to hear the first existing recordings of the Bill Evans, Eddie Gomez and Marty Morell Trio. Evans played with this trio for more than 6 years, since late 1968 until beginning of 1975.

Recorded by George Klabin (Resonance Records founder and owner) at the Top of The Gate, directed by the eccentric and flamboyant Jazz empresario Art D’Lugoff which sought out the hottest talent, hosting prominent jazz artists, including Billie Holiday, Duke Ellington, Dizzy Gillespie, Aretha Franklin, and Miles Davis, as well as the best in comedy, including Bill Cosby, Mort Sahl, Woody Allen, and John Belushi.

Bill Evans and his trio spent no less than 4 weeks of engagement at the Club. During that very same period, on the lower Club, The Village Gate, had two resident groups which played alternatively, The Thelonious Monk Quartet and The Charles Lloyd Quartet. On the latter there was a young pianist called Keith Jarrett!!

On the 28 page booklet with essays by Nat Hentoff, Gary Burton, Eddie Gomez, Marty Morell, George Klabin and Art D’Lugoff’s son Raphael we can find a photo of the club. Among the crowd we can see pianist Billy Taylor and sax player ‘Cannonball’ Adderley enjoying what, at the time, was considered the most influential and interesting piano player in the Jazz World.