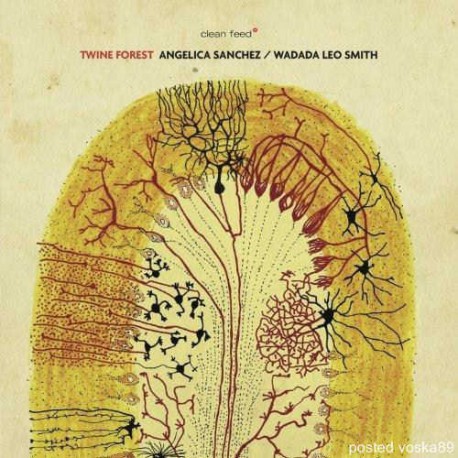 A duo is the most intimate of encounters in jazz – such a tête-à-tête demands rare communication, forcing each player to open up, unable to rely on group interplay. The duo of pianist Angelica Sanchez & trumpet great Wadada Leo Smith is a special relationship, new yet not new. Sanchez has been part of two Smith-led projects, the Golden Quartet and Organic, and their duo relationship arose naturally out of their past encounters. Following several all-improvised concerts together, Sanchez and Smith have created their first album together with Twine Forest, the ravishing result of improvisational communion in the studio. Smith’s tone is like silver – glinting off Sanchez’s chords and lines, glowing in resonance with the strings of the piano. TheLos Angeles Times has said that Smith – who was nominated for a Pulitzer Prize last year – “not only recalls Miles at Davis at his most uncompromising but also builds upon his legacy to the point where such comparisons lose meaning.” And The New York Timeshas said: “In her piano playing and compositions, Angelica Sanchez seeks out the lyrical heartbeat within any avant-garde storm,” while All About Jazz has called her “a perceptive composer and cunning improviser.”