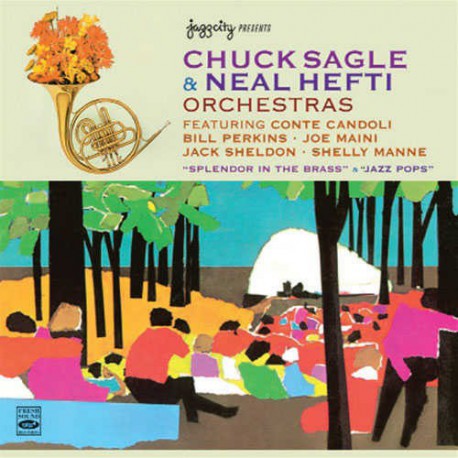 Splendor in the Brass + Jazz Pops

Splendor in the Brass + Jazz Pops

Chuck Sagle was a widely experienced arranger and conductor when, in 1962, he joined the a&r department at Reprise Records in Los Angeles. Among the first projects he produced for the label was his own album “Splendor in the Brass.” His tasteful arrangements skillfully juxtaposed various small instrumental combinations with each other and with the full orchestra, with deftly voiced French horns and saxophones revealing his fertile imagination and versatility. Garnishing these well-conceived performances are solos by such luminaries as Lou Levy, Shorty Sherock, Cappy Lewis, Buddy Collette, Bill Perkins and Emil Richards.

The second album on this set, “Jazz Pops,” also a Reprise release, is by another big band, this time under the direction of arranger, composer, trumpeter and bandleader Neal Hefti. While his arrangements here are of a different order to his early work for Woody Herman and Count Basie, they still bear the mark of his considerable talent. His writing is economical and unpretentious. The soloists, moreover, include Joe Maini, Jack Sheldon, Ted Nash, Larry Bunker and Conte Candoli.