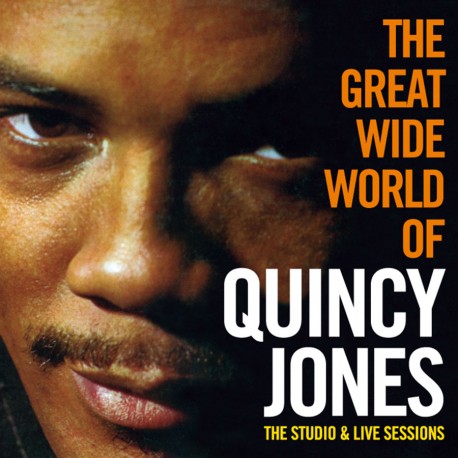 The Studio and Live Sessions

The Studio and Live Sessions

This edition presents the complete original classic album "The Great Wide World of Quincy Jones", presenting the outstanding 1959 Quincy Jones orchestra. Also, it have been added a live performance in Zurich by the same band filled with superlative stars. It was issued under the same title with the addition of the word “Live!”

*****Downbeat
The Great Wide World of Quincy Jones “This LP grows on you. Play it over once, and it’s nice, twice ain’t bad. But keep at it, and the first thing you know, you’re flipping.” - Ralph J. Gleason

Although Quincy Jones was only 26-years old when he made these recordings (he is currently 76 at this writing), he was already a veteran musician with a lot of experience under his belt. In his dual role of trumpet player and arranger, he began working with Lionel Hampton’s orchestra in 1951, where he made his debut recordings on May 21 of that year. Although he was a competent trumpet player, Jones always saw himself (and was seen by his musical peers) more in the role of arranger, composer, and later band leader and musical producer. His musical conception, however, as Dizzy Gillespie states in his liner notes for The Great Wide World of Quincy Jones, was clear from the beginning, and his long career and recognition both from audiences and the musical industry speaks of its quality.