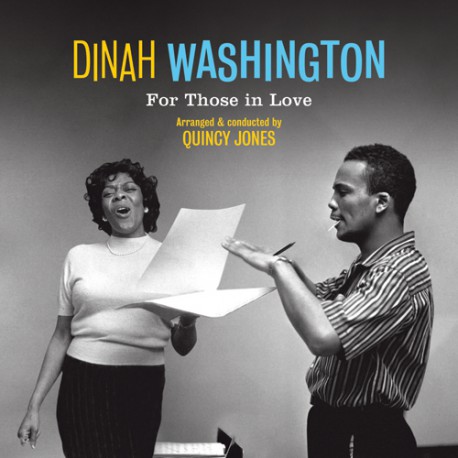 For Those in Love

Dinah Washington (1924-1963) recorded many albums for EmArcy, and during the period from 1954 to 1961 she worked with Quincy Jones on numerous sessions. This release contains the first of their recorded collaborations: three brilliant small group sessions showcasing Dinah, which were taped on consecutive days during March 15-17, 1955 and were originally issued on the LP "For Those in Love" (Emarcy MG-36011). The arrangements were by Jones, who also conducted the band and played a trumpet solo on “Ask a Woman Who Knows”. The backing group includes such stars as Clark Terry, Jimmy Cleveland, Paul Quinichette, Cecil Payne, Wynton Kelly, and Miles Davis’ drummer Jimmy Cobb (both Kelly and Cobb were part of Dinah’s regular accompanying group for a long period). All of the other Dinah Washington-Quincy Jones collaborations were made in a big band format.

Plus:
QUINCY JONES, trumpet (on B5 only)
CANDIDO CAMERO (bongo on A5 only)

(*) BONUS TRACKS:
From the same sessions, but not included on the original LP.