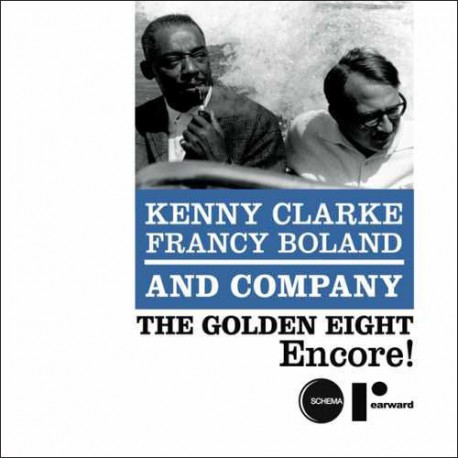 This is the first chapter of this jazz series.

All the tracks, taken from the second of the May 1961 Golden Eight recording sessions, are now released for the first time, with liner notes by Mike Hennessey.

This reissue is great news for the jazz-loving community. The multi-national Golden Eight ensemble assembled by Gigi Campi featured Kenny Clarke and Jimmy Woode (USA), Francy Boland and Chris Kellens (Belgium), Dusko Gojkovic (Yugoslavia), Raymond Droz (Switzerland), Derek Humble (UK) and Karl Drevo (Austria). And it was the forerunner of the legendary Clarke-Boland Big Band. Seven of the eleven pieces in the album are distinctive originals by Boland, the remaining four tracks being devoted to classic standards.

The album opens with You Dig It, a brisk, marching blues by Boland with sprightly solos by Dusko Gojkovic, Derek Humble (in Parkerian mode), Karl Drevo and Kenny Clarke. There follows the Arthur Schwarz/Howard Dietz ballad, Alone Together, written in 1932 for the musical, Flying Colors. It is taken at a lively tempo and has Raymond Droz playing the melody on alto horn, followed by solos from Boland, Drevo, Humble and Woode.

The tempo slows down for the next number, the Jimmy Van Heusen/ Johnny Burke ballad, But Beautiful, which is given a sensitive, tasteful and somewhat melancholy treatment by Karl Drevo. A muted solo from Gojkovic follows and then Drevo takes out the piece, which ends on a mellow ensemble chord.
The next track, Invitation, was written by the Polish composer, Bronislau Kaper, for the 1950 Lana Turner/Ray Milland film, "A Life Of Her Own" and, two years later, it became the theme of the Van Johnson/Dorothy Maguire film, "Invitation". It then went on to become a jazz standard. Francy Boland arranged the number as a beguine.
For this track and for Dia Blue, the octet is augmented by Belgium’s Fats Sadi on percussion The piece features a busy, muted solo by Gojkovic at double tempo and a highly dextrous outing by Humble.
Jimmy Woode plays the melody of Autumn Leaves, which is taken at a good, crisp tempo. Dusko follows, muted, and then Karl Drevo really gets into his solo stride on tenor saxophone. The final chorus has Jimmy Woode reverting to the melody on the bridge for the last 16 bars.
The up-tempo 32-bar Boland original, Papa Satan Aleppe, features some rich ensemble writing by Boland which makes effective use of dynamics.
Chris Kellens takes the lead and then delivers a fine solo on baritone horn. Boland shares fours with the ensemble, which then takes over, with Klook soloing mightily on the bridge.
Free Wheel is another well-crafted Boland original on which he takes a tour de force percussive solo, followed by Derek Humble in fluent and fiery form.
Dia Blue, in 3/4 time, starts off in dirge-like mode but then burst into a blazing up-tempo section with Kenny Clarke in explosive form, reverting to the slow tempo for the out chorus.
Miriam Doll, a medium-tempo trio feature, has an intro by Kenny Clarke and exemplary solos by Boland and Woode Then the tempo moves into top gear for A Ball For Othello, another Boland original which features some unorthodox ensemble writing and inspired solos by Karl Drevo, Dusko Gojkovic and Klook.
The session concludes with a 71-second snatch of the piece Boland wrote in honour of the maestro - La Campimania.