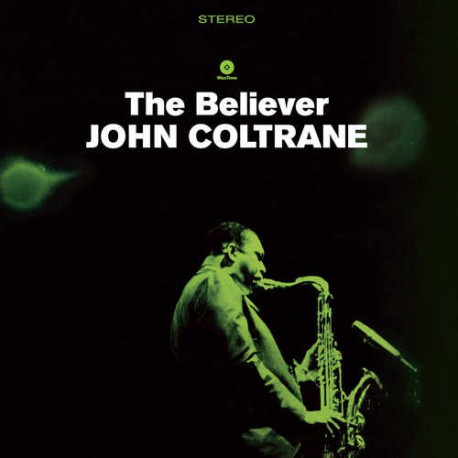 JOHN COLTRANE, tenor sax on all tracks, plus:

John Coltrane was one of the most revolutionary musicians in jazz history. In much the same way that Charlie Parker became a dominant influence during the bebop era, there was a time during the 1960s when nearly every tenor sax player tried to imitate Coltrane’s sound (something that still occurs today).

The Believer was recorded in 1958 but issued years later, during Coltrane’s Impulse years. On the first three tracks, the masterful tenor saxophonist is joined by pianist Red Garland, bassist Paul Chambers, drummer Louis Hayes, and either Donald Byrd or a young Freddie Hubbard on trumpet. An interesting aspect to the set is that it is the first example of Coltrane being associated with pianist McCoy Tyner. Tyner is not on the date, but he contributed “The Believer” (wrongly attributed to the saxophonist in the original liner notes), which Coltrane performs along with Calvin Massey’s “Nakatini Serenade” and the Rodgers & Hammerstein ballad “Do I Love You Because You’re Beautiful?”. The Two longer tracks were recorded during the same January 10, 1958 session that produced “Lush Life”, “Come Rain or Come Shine”, and “Lover”, subsequently issued on the LPs Lush Life and Black Pearls. The Rodgers-Hammerstein tune was a leftover from the December 26, 1958 date that also produced “Then I’ll Be Tired of You”, “Something I Dreamed Last Night”, “Bahia”, “Goldsboro Express”, and “Time After Time”, released on the albums Stardust and Bahia. The two Ray Draper tracks added here as a bonus were originally released under Draper’s name and were chosen here because they have already been associated as bonus tracks to The Believer in previous issues.