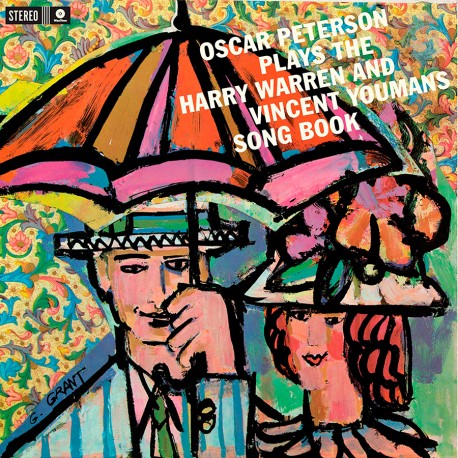 Born in Montreal, Canada, on August 15, 1925 (he died in Ontario on December 23, 2007), the young Oscar Peterson was convinced by Granz to travel to the United States, where he became one of the most featured musicians in the “Granz caravan”, with respect to both studio recordings and as part of the touring Jazz at the Philharmonic group. Peterson recorded as an accompanist for many other stars, and also as the leader of his trio, which by 1959consisted of Ray Brown on bass and Ed Thigpen on drums. This is the formation of the Oscar Peterson Trio heard on this homage to Harry Warren (1893-1981) and Vincent Youmans (1898-1946).

These recordings derive from a series of intense sessions during which Peterson and his band taped many different songbooks by the most renowned American composers. Throughout 1959, Peterson also waxed his tributes to Irving Berlin, George & Ira Gershwin (he would also record a trio version of Porgy and Bessthat same year), Jerome Kern, Richard Rodgers, Harold Arlen, Jimmy McHugh and Duke Ellington. Previous Peterson recordingsof Warren’s “Nagasaki” and Youmans’ classic “Tea for Two” have been added here as a bonus.