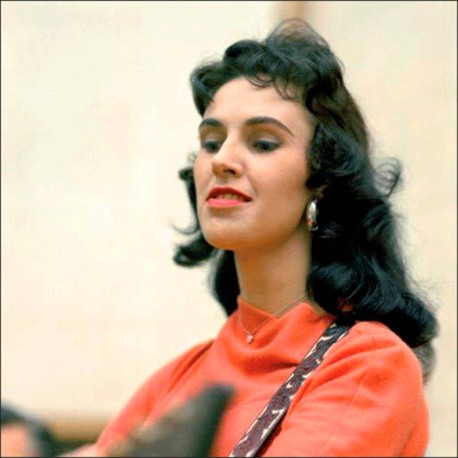 Wanda Jackson was the first woman to bring sex appeal to the rock & roll scene. The stage was her kingdom, and she ruled it with an aggressive style and signature growl, which shocked listeners and gained her tour dates with Elvis Presley, Buddy Holly, Johnny Cash, and Jerry Lee Lewis. She growled and moaned with her voice often purring like a cat, or groaning like the motor of a ‘57 Chevy. At times she even sounded like a groovy rhythmic chipmunk. Through it all Wanda Jackson has become a shimmying emblem of female independence in a male-dominated industry, testing boundaries with her forward style and lyrics about mean men and hardheaded women (and those are the love songs). Her lyrics were ahead of their time, featuring sexually suggestive innuendo and depictions of strong women who did not put up with controlling men. More than anything, her songs conveyed pure, unadulterated good times.

This quintessential collector’s edition includes Jackson’s second LP, There’s a Party Goin’On, originally released by Capitol Records in January 1961, and long unavailable on vinyl. It is a solid and energetic firecracker of a set, which showcases Jackson’s unique vocal style (featuring her trademark shrill raspy staccato bursts). The mood of the album is exemplified by the lyrics from the title track: “So grab your shoes and baby grab your mink/ And leave those dishes on the kitchen sink/ ‘Cause there’s a party goin’ on/ Oooh, there’s a party goin’ on”. The LP also contains covers of a handful of early rock hits such as “Tweedlee Dee” and “Kansas City”. One of the highlights is the staggering guitar playing of Roy Clark as exemplified on the standout
cut “Hard Headed Woman”. The great Buck Owens also adds world-class guitar picking and hot licks to the album, which features accompaniment by Marvin Hughes on the piano, as well. Wanda Jackson is utterly authoritative on everything she sings here.

In addition to this sensational LP, we have included 4 bonus tracks from the same period, including the hidden treasure “Whirlpool” (which was originally issued as single record in 1962). This great material represents the cream of the crop from Jackson’s hitmaking stretch for the Capitol label during her most inspired years. All of these original gems –which have beenbrilliantly remastered to achieve the most pristine sound– are simple two-and-a-halfminute songs that convey all the sheer power and emotion of rock & roll.