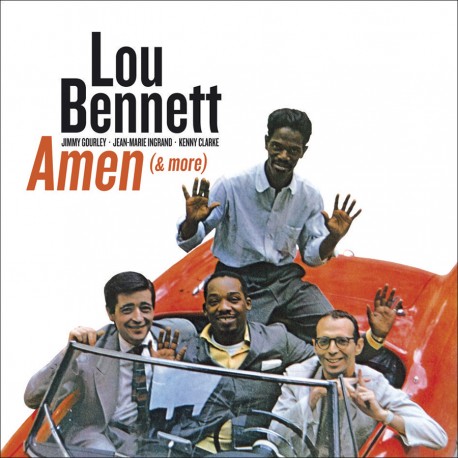 • 7 BONUS TRACKS APPEARING ON CD FOR THE FIRST TIME EVER!!!

One of the finest performers on his instrument during the 1960s, American jazz organist Lou Bennett (1926-1997) was a bebop pianist prior to switching to the organ in 1956 after hearing Jimmy Smith. He toured the U.S. with an organ trio between 1957 and 1959, and then moved to Paris in 1960. There he recorded and performed at the Blue Note with Jimmy Gourley and Kenny Clarke, among others.

Both musicians are heard here (along with French bassist Jean-Marie Ingrand) backing Bennett on the LP "Amen" (RCA 430.050). Recorded in Paris and reissued here in its entirety, "Amen" marks the organist’s debut album as a leader.

As a bonus, seven extremely rare tracks have been added, all of them appearing here on CD for the first time ever. The first three tunes were recorded in 1962 and feature the organist playing duets with drummer René Nan. The last four tracks were the only ones featuring Bennett from the out of print LP Melodies sur l’oreiller (Bel Air 411.052), and feature the organist in a trio format, with pianist Pierre Spiers and Kenny Clarke again on drums.