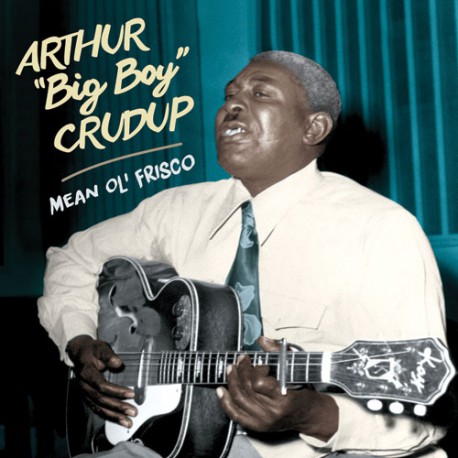 Although “Big Boy” was on the scene for decades (recording numerous singles and 78s for different labels), lack of interest in his music during the mid-‘50s led to his temporary retirement from 1955 to 1961. However, his career was revived when Bobby Robinson’s Harlem-based Fire Records let Crudup cut his first long play, Mean Ole Frisco, in 1962. In addition to his vocals, Crudup is showcased here playing all of the instruments (guitar, bass and drums). Highlights from this long-unavailable LP include re-recorded versions of a number of Arthur’s older hits, which benefitted from improvements in recording techniques and the artistically free atmosphere of the session. Many critics feel that Mean Ole Frisco is the magnum opus of Crudup’s career. In addition, this collector’s release contains 15 bonus tracks (featuring hard to find sides, as well as the original versions of some numbers from the former album). These recordings constitute the foundation of Arthur Crudup’s musical legacy.